The Deal That Says "Splunge!" 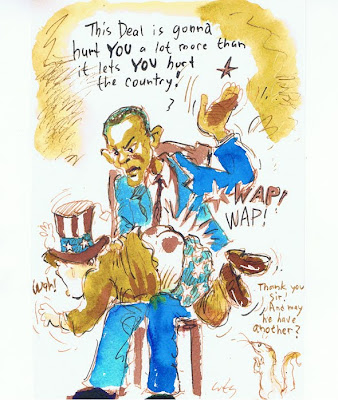 where the Texas movie producer gets a bunch of screenwriters in a room and badgers them all until they are reduced to hiding under the table? The Texas producer actually reminds me a lot of the Tea Baggers. But I digress.

Terry Jones is so terrified of getting axed on the spot he shouts out “Splunge”, and then explains that it means that the idea proposed by the producer might be a terrific idea, but possibly not, and he’s not being a yes-man. Quite a word, splunge! Anyway, saves his neck.

What’s more, it’s so confusing you can pretty much spin it any old damn way you want.

Personally, I haven’t quite made up my mind about it, splungily, because I have a hard time seeing how this will all play out in the future. It absolutely MUST be played out in a way that exposes the Baggers for the unreasonable folks they are, and makes them radioactive to all but the most Kool Aid slurping RWers come reelection time.

But I’m guessing I probably never WILL make up my mind about it, because I am pretty sure in the meantime, and not too far off, somebody, somewhere will manufacture the NEXT crisis du jour to seize us all by our craniums.
So, Splunge!