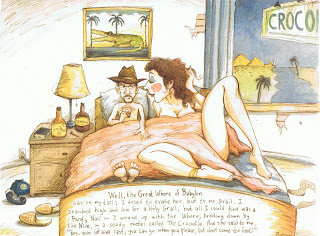 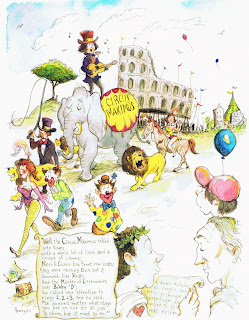 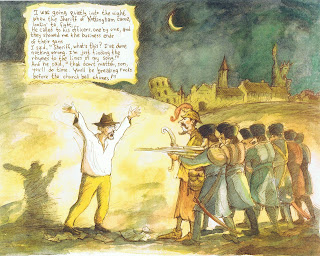 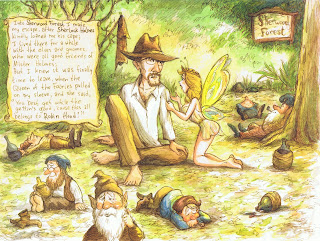 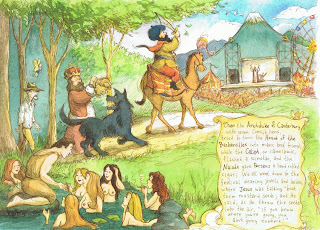 Well, the Great Whore of Babylon was on my tail
I tried to evade her, but to no avail

I searched low and high for a Holy Grail
but all I could find was a rusty nail
I wound up with the whore, bedding down by the Nile
in a seedy motel called the Crocodile
and she said to me, “boy, your lot ain’t cast;
you can go when you please, but don’t come too fast!”

then the Circus Maximus rolled into town
with a whole lot of lions and a couple of clowns
and Nero and Cicero had front row seats
they were reciting Ovid, but it sounded like Keats
and the master of ceremonies was Bobby D
who called our attention to rings one, two and three
and said, “it doesn’t matter what stage you’re on
cuz it’s all just a show, but it must go on”

I was going quietly into the night
when the Sheriff of Nottingham came, looking  to fight
he called to his officers, one by one
and they showed me the business end of their guns
I said, “Sheriff, what's this?  I’ve done nothing wrong,
I’m just finding the rhymes to the lines of my song.”
And he said, “that don’t matter none; you’ll do time
you’ll be breaking rocks before the church bells chime”

into Sherwood Forest I made my escape
after Sherlock Holmes kindly loaned me his cape
I lived there for a while with the elves and gnomes
who were all good friends of Mr. Holmes
but I knew it was finally time to leave
when the Queen of the Faeries pulled on my sleeve
and said, “You best get while the getting’s good
‘cause this all belongs to Robin Hood”

then the Archduke of Canterbury took seven Cornish hens
and tried to turn the Hound of Baskerville into man’s best friend
while the caliph on camelback flashed his scimitar
and the Naiads gave Perseus a hand-rolled cigar
we all went down to the festival wearing jewels and beads
where Jesus was talkin’ bout them mustard seeds
and He said as He threw the seeds into the air
“If you know where you’re going, you ain’t going nowhere!”