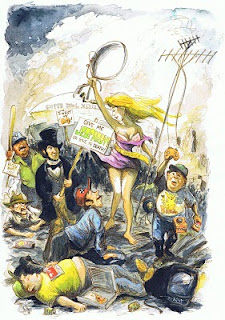 Why the Revolution Won't Be Televised
Keep you doped with religion, and sex and TV;
and you think you're so clever and classless and free;
but you're still f**king peasants, as far as I can see
- John Lennon, "Working Class Hero"
Who Wants to Be a Revolutionary? Oh, there's anger out there! America has got to be one of the most royally pissed off countries in the world. It doesn't matter if you're a leftie or a rightie, if you're an American, there is a good chance that something has got your blood boiling now. It might be stolen elections, Kenyan birth certificates, Katrina, terrorists, bank bailouts, wars for oil, telecom spying, CEO's salaries, religious fundamentalism, misleading food labeling, the slow death of the American automobile industry, the quicker demise of the American middle class or any sordid combination of the above. If you haven't thought at some point in the last ten years or so that things are seriously FUBAR, that the system doesn't work, and that it definitely doesn't have YOUR best interests in mind, then I wonder about you. Where have you been?
Yes, the mood is ugly. It's Tea Party ugly. It's Ron Paul angry. It's the stuff of which revolutions are made, the fire next time that burns like a thousand California wildfires that somebody, no doubt, blames Obama for (and somebody else probably blamed Bush for). Yes, there is revolution in the air!
Except, there isn't. The American people are NOT going to revolt, folks. The country isn't going to split apart either. The country probably isn't even going to sweep a true maverick like Paul into power anytime soon. Why? People are too comfortable! A second American Revolution is no more likely to occur than a rebellion of the brainwashed, mutated denizens of Huxley's "Brave New World", and for the same exact reason. The Powers that Be have got us, folks, right where they want us. Docile, overfed, overstimulated, undernourished and undereducated, and most of all, hyper-entertained. Which has led me to wonder, what WOULD need to happen for Americans to rise up like the Founding Fathers, taking to the streets with eyes blazing and teeth gnashing? Something the Powers that Be would never be so stupid as to do; take away our televisions!
You'd see a revolution then! Without Monday Night Football and American Idol and Jeopardy and Lost and Jay and The Simpsons, without Wii and PlayStation, without commercials telling us what to buy and what meds we need to be taking, people would flat out lose it! You want anger? You ain't seen nothing yet!
And see it you won't. Nobody is going to take anybody's television away. Television has done what no tyrant nor terrorist has ever come close to accomplishing. It has reduced a once proud and powerful nation to a land of dazed zombies, wearing a groove in the rug between the couch and the fridge while their warden, the glowing rectangular object in the Living Room, goads them to ask the question no revolutionary has ever asked; "What's on after this?" 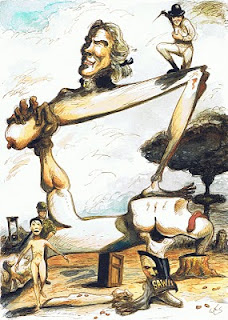 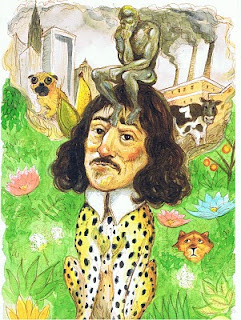 I Think, Therefore I'm Nuts!
And it came to pass, when men began to multiply on the face of the earth, and daughters were born unto them,That the sons of God saw the daughters of men that they were fair; and they took them wives of all which they chose.
- Genesis 6
I'm an ape man, I'm an ape ape man, oh I'm an ape man 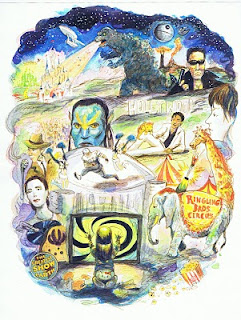 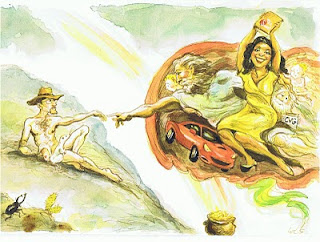 What Color Is Your Paradise?
Okay, I suppose it's possible that the reason I am not as happy, rich, famous and world renowned as I could be is that I didn't read "The Secret", the blockbuster bestseller that proved the effectiveness of "The Law of Attraction" for one Rhonda Byne, the author who "magnetized" millions of happiness seekers as purchasers of her book and DVD, by first "giving intent" that Oprah Winfrey would do that thing she does, which is turn self help authors into overnight sensations, such being the "manifestation" power of the Big O. 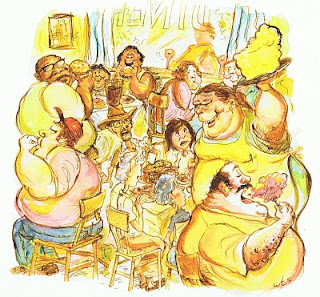 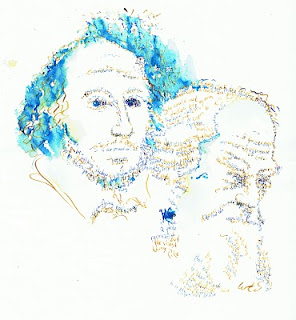 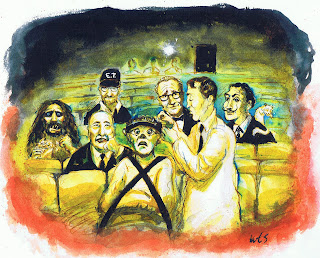 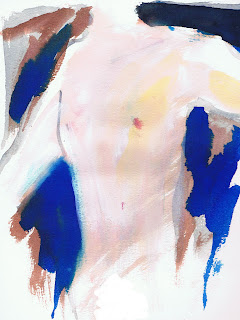 The Innocence of the Human Body
Where the dogs go on with their doggy life and the torturer’s horse
Scratches its innocent behind on a tree.
- Auden
St Francis of Assissi had, to be sure, an odd relationship with his body. As a strict ascetic, he considered it of utmost importance not to give in to its cravings for pleasure and leisure. He dubbed his own body “brother ass” and felt that it should be treated as any other domestic beast of the time. Beaten when in need of discipline, and given only coarse food upon which to subsist. He was known to curb his temptations by hurling his body into snow, or even on one occasion a briar patch which he tossed himself about in until his flesh was ripped and bleeding. However, by the time of his death, the great man had reconsidered his ill treatment of his body – his earthly vehicle – and asked the Lord to pardon him for having treated Brother Ass so cruelly. He realized that he had been indulging a fascination; an attempt to conquer that which his Creator had given him. Finally, it seems, that he who loved life and all its manifestations, had finally learned to love, or at least honor, his own organism.
Although many may feel that Francis’ relationship to his body was downright bizarre, I think it is difficult to escape the conclusion that we, in our modern age, relate to our own bodies in even more dysfunctional ways, or at least are encouraged to. We obsess over its skin layer, its most superficial aspect. Say the word “body” to a teenage male, and no doubt the image that will result is a female with Playboy-approved proportions. Or perhaps his own body, “ripped” and sculpted. It is doubtful that he will think of the intricate, mechanical wonder he inhabits, the magnificence that goes far beyond the skin layer. I’m reminded of a scuba diver, who, seated next to a friend who looked out at the ocean at sunrise and remarked at how beautiful it was, replied, “yes, and that’s only theroof!”
We indulge our bodies in exactly the way that St. Francis frowned upon, as we load up on ice cream, tortilla chips, cola, coffee and red wine. We then scan it for signs of resultant flab, and hold it up for critique alongside the impossible ideals that mass media relentlessly parades before our eyes. In magazine articles and website pages we are asked to consider which Hollywood hunk or starlet has “the best body”, when presumably the correct answer should be the one that functions best – the one that digests, eliminates, breathes, repairs, etc. most efficiently.
No greater indication of our dysfunctional relationship to our bodies can there be than the fact that we have created a trillion dollar industry that has as its sole purpose the manufacture of machines and devices that destroy and disfigure it by the millions. Our so-callled “defense industry” would perhaps be looked upon less favorably by its supporters if it were referred to, more honestly, as “the body destroying industry”. Although it has numerous competitors, perhaps the most atrocious and obscene example of this in all our sad history was the Treblinka II Death Camp in Nazi Germany. This was the Industrial Revolution meets Dante’s Inferno. For the first and only time in history an actual factory was built, with train lines leading up to it, that served no purpose other than the destruction of human bodies as quickly and “efficiently” as possible. People were carted in by the train car-load, and few lived more than 24 hours after arriving.
And these bodies that we waste and destroy so casually are near miraculous machines that are far beyond the capabilities of our greatest scientific geniuses to create or even imitate. Each cell, when it is first birthed in us, is like any other cell in our bodies, yet each knows how to evolve through exactly the right iterations so that it becomes part of our hair, our eyes, our lungs, our genitals, etc. How do the cells do this? Nobody knows, but it is likely the answer will someday be found in the portion of our DNA that biologists have lovingly referred to as “junk”.
We punish bodies mercilessly, and yet throughout the history of our species they have never sinned in any way. They serve us faithfully to the fullest extent they are capable at any given moment, until they can no longer. When they long for sleep we deprive them of it. When they need healthy natural food to stay strong, we insist that they make do on starchy, sugary, salty substances they have little use for. We keep them chained to chairs when they long to move about in the open air, as they were evolved to do. If we treated our pets the same way we treat our bodies we would be considered negligent, at best. And we punish bodies for the transgressions of the mind. I am opposed to the death penalty because I believe it is always a miscarriage of justice, as the body merely did what it was told, no matter how heinous the crime. To the body, slicing a cucumber or slicing into a human finger is essentially the same act, insofar as it merely follows the instructions of a healthy, or deranged, mind. An eye for an eye is thus two outrages, not one.
I am only writing to say that human bodies are innocent. We have yet, as a species, to demonstrate our worthiness to inhabit them. We should never harm them in any way. 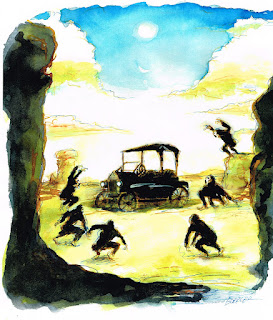 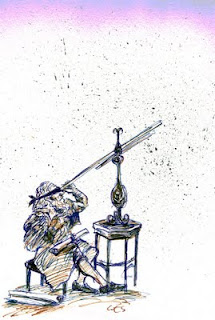