How did you get here? 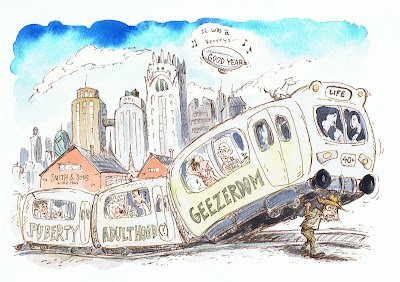 Tokyo is an enormous city; it’s almost impossible to adequately describe how expansive it and its surrounding cities are. Densely populated, but at the same time relatively well run and organized, it features one of the most extensive and intricate mass transportation systems in the world. So a common question when meeting friends, say at a party,  is, “how did you get here?” There are commonly a variety of public and private train and subway routes to access a given destination. There are several websites whose only purpose is to provide access information, including all available options, in terms of price, number of transfers, and arrival time down to the minute!

It’s an interesting bit of small talk, revealing as it does just what an important aspect of life in Tokyo is the gargantuan system of vehicles and tracks that take people where they want or need to go. One of the reasons people ask is that they are always curious to find out if an even more convenient route is available to them that they hadn’t considered before. The one thing that you DON’T see are the trains themselves; in other words, people come together after disembarking, and don’t show up dragging their trains behind them! Yes, that is a signal that I am getting metaphorical here! I’ve been thinking a lot recently about the human tendency to drag our past around with us. It’s not all that unlike hauling the train that got us to where we are around with us everywhere we go. For someone like me who is living my fifth decade on the planet, that’s quite a lot of load to haul!

Our past is essentially a vehicle. It is the “train” we rode to get to the exact point where we are now. We honor our past best by experiencing the present moment as fully as we can. If we always carry the heavy weight of our former experiences, particularly the regrets and recriminations, the disappointments and hurts, we really ARE like someone hauling an enormous, heavy train on his back, unable to move as fluidly through the present moment as we could if we were able to just put it down. I wrote a song a few years ago called “Recovery”  that included the lines;

I didn’t know where I was going, I just knew that where I was, was no place that I wanted to stay;

carrying my past around, ’cause I didn’t know how to put it down, is how I wound up where I am today

Like a train, our past carries a huge amount of momentum with it. It can be hard to step off it as it chugs along, adding to its “weight” with each chunk of scenery it devours as it moves along. For example, if a moment of disappointment, a setback of some kind, gets fed back into a history of similar moments we have experienced in the past, we can “lose track” of a.) the experience itself, b.)our place in it in this current moment, and c.) our power to do anything about the problem with a clear head and the eyes of newness. That’s when we really need to “step off the train”. It carried us here, to this place. Maybe, like the commuters of Tokyo, we could have taken a quicker route, one with less transfers, one less costly. But we didn’t!Regardless, whatever train we took to the place we find ourselves now, we don’t have to carry its weight around with us, nor do we serve ourselves by doing so.  As with the people sitting around at a party in Tokyo, there will always be another train, maybe even one we never realized we could take before. So while we’rehere, we should enjoy the party!