A(xl) Rose By Any Other Name 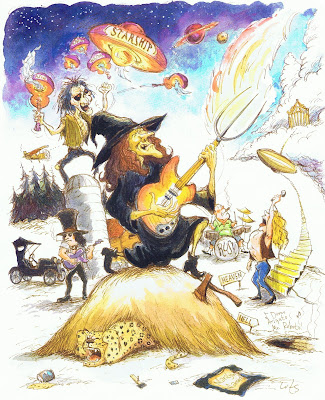 "Man, that Led Zeppelin sure plays some kickass guitar!" I suppose one has to be of a certain era to appreciate the humor inherent in that line; there was a time when American kids really did confuse British band's names with their members. Hence, Ian Anderson, the eccentric creative force behind Jethro Tull, actually was Jethro Tull in the eyes of many fans across the pond, and Led Zeppelin was a guitar hero who sang like a banshee. This was milked for full comic effect in the classic line, "Oh, by the way, which one's Pink?" from Pink Floyd's "Have a Cigar". John Entwistle, bemoaning how his band wallowed in relative obscurity in the U.S. before their breakthrough rock opera, observed that many newly hip fans came to think of Tommy as a golden haired hunk who cut a double album titled "The Who".

This isn't all that hard to understand, what with so many hard rock acts of the period giving themselves names that sounded like personal names, while at the same time British singers such as Elton John and Mick Jagger going by names that, at least to North American ears, sounded unusual enough to actually be band names. Whether name-resembling or not, during the late sixties to mid seventies a band name consisting of two words generally connoted a hard, riff laden, kickass sound. Led Zeppelin, Deep Purple, Black Sabbath, Iron Butterfly, Jethro Tull, Thin Lizzy, Uriah Heep, Alice Cooper, Judas Priest, Iron Maiden, etc. If you liked your hard rock with a Dixie twist, you had Lynyrd Skynyrd and Molly Hatchet to wreck your eardrums with.

Some of the band names were actual names, from history, literature or elsewhere. Jethro Tull was a British agriculturalist from the 17th century. Uriah Heep was a character in "David Copperfield". Alice Cooper, which was the band's name before singer Vincent Furnier adopted it as his own, was supposedly the name of a 17th century witch (what IS it about the 17th century?) . Actual member names have been used as well. The Van Halen brothers, Eddie, Allen and Wolfgang (yes, Wolfgang) would have been crazy not to adopt their family name as their band's name; it was just too perfect.  Similarly, John Bongiovi had only to do a little tweaking to create a name similar to his hair metal forefathers, and Voila! Bon Jovi was born.

Over all these acts, Led Zeppelin reigned supreme, so their influence was unquestionably the greatest, not only with respect to their sound, but with naming as well. Their own reason for dropping the "a" from "lead" (the name was suggested to Jimmy Page by Entwistle) was logical enough: it was so fans wouldn't mistake them for "Leed Zeppelin". The trend caught on. In deference, the quirky misspelling of words (which had already been done by The Beatles) became de rigueur.  Soon we had Motley Crue, Axl Rose (lead singer of Guns&Roses), culminating in surely the most shameless name ripoff in rock history (after The Monkees), Def Leppard. Like a hawker in Hong Kong barking out, "Get your authentic imitation Rolexes!", these British glam metalists, with their missing "a" and double "pp"s, could hardly have been more brazen.

Hard rock is not the only genre characterized by similarities in band names. During the latter part of the same era, a lot of crap bands emerged, "perfecting" a soulless brand of music known as power pop. Many of those acts had names related to locations or traveling, i.e. Boston, Kansas, Foreigner, Journey and Asia. Taking us a bit further afield were Starship (whose original name, Jefferson Airplane, was strikingly similar to that of their California hippie brethren Buffalo Springfield, right down to the syllable structure and double "ff"s) and Styx. Styx is a location, being the mythical river to hell. And if "Mr. Roboto" isn't the music playing on the ferry that takes you across it, then some demon isn't doing his job well enough!

A certain power trio from Canada who, although they managed in the space of their first two albums to rip off nearly every Led Zeppelin cliche in the songbook, were a little more original in the name department, opting for a single word, Rush. Perhaps the timing was off. Perhaps if Geddy Lee and his bandmates had formed their group today, they would have selected a name every bit as sinister sounding as Black Sabbath, Iron Maiden or Molly Hatchet. Naturally, they would have had to misspell one portion of the name for form's sake. Imagine twenty thousand lighters being hoisted skyward by stoned teens, as our axe wielding heroes emerge from backstage; "Cleveland!!!! Are You Ready??? Let's welcome...... Rush Limbah!!!!"