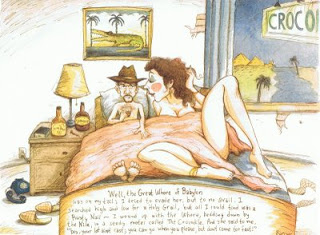 Well, the Great Whore of Babylon was on my tail,

I tried to evade her, but to no avail;

I searched low and high for a Holy Grail,

but all I could find was a rusty nail,

I wound up with the whore, bedding down by the Nile,

in a seedy motel called The Crocodile;

you can go when you please, but don’t come too fast!”

Here's a series of illustrations I did for a song, roughly based on Bob Dylan's "Highway 61" and other songs of that era of his where he put lots of literary, Biblical and historical illusions into puns and wordplay. I wrote the song first, but it was so full of images that I felt that I had to do it justice by painting them. They have been published in reverse order so they appear first to last. Enjoy!