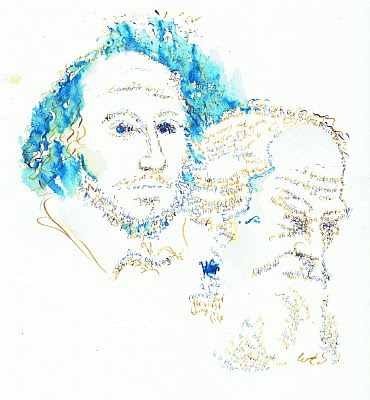 Let’s imagine a world very different from our own. The only thing on this world are tiny curves and tiny straight lines. These tiny curves and straight lines get tossed around by the wind a lot, and so they often bump into each other. Sometimes, when they bump into each other, they connect. So, for example, amidst all the many possible shapes that may arise from that happening, you sometimes get alphabet shapes, such as “f” or “S”. Now, imagine that for some reason, there is something about the makeup of this world that selects for alphabet shapes; in other words, there is some advantage to the 52 letters of the alphabet (lower and upper case), the digits 0 to 9, and all the punctuation marks of the English language, over the other myriad of shapes that form. Therefore, when these selected shapes form, they reproduce. The other shapes do not; they quickly become extinct. Keep in mind that none of these letters that are forming and reproducing are the slightest bit aware that they even exist, much less that they are reproducing. There is just something about this planet I am describing that promotes their existence.

After a very long time, the 70-odd selected shapes are the only forms left on the planet, and they flourish. Naturally, the same wind that caused the tiny curves and straight lines to bump into each other causes the letters to bump into each other as well. All sorts of combinations follow. “cY”, “tIw”, etc. Inevitably, combinations that we recognize as words also come together. “And”, “so”, “on”, and so on. As before, there is some property of this world that selects for the word-combinations, and not the meaningless ones. Eventually, after a very long period of time, all the words in the dictionary exist on the planet.

The next progression, also by process of selection, is short sentences. “I am”, “It is hot”, “Today I will go”, and so forth. Combinations such as “wood to shabby” and “door bag never” are de-selected. They have no advantages which would enable them to survive on this world, so they go extinct.

You get the idea. The key thing to keep in mind is that when a sentence forms, even a really beautiful one such as, “Shall I compare thee to a summer’s day?”, it has no idea that it even exists, far less that it is beautiful. It’s just selected for. There is some advantage to being exactly like it is, so it gets to make more of itself. From sentences we go to paragraphs, and so on. If we were to take the case of the line from Shakespeare’s famous sonnet quoted above, it won’t select for that one line to just keep repeating itself, the way the mad writer inThe Shining kept writing “All work and no play makes Jack a dull boy”. It also won’t select for this:

Rough winds do shake the darling buds of May

Shall I compare thee to a summer’s day?

That, after all, is backwards. Of course the idea of “backwards” would only have any meaning if the lines above were aware that they were composing something meaningful. They aren’t aware of this. They just keep on blindly reproducing, but they only manage to survive and propagate by being in the right order. This world offers advantages, the greatest of which being survival, to passages of prose and poetry that have meaning.

After long, long periods of time, and the same processes going on blindly and mechanically, we move from paragraphs, to short stories, to novellas, to novels, ultimately to “War and Peace”. No author, just the natural selection of meaning over meaningless-ness. “War and Peace” doesn’t know it’s a novel, or a work of brilliance, or even that it is very long, as novels go. It just is. A work of art, unknown to itself, equally unknown to the blind forces that brought it into being.

Until eventually a being from another world comes upon it. This person is a scientist, and so he begins to study it. He can see that it is exquisitely organized. However, he is a little confused about some parts of it. On his world, there are no such things as names. So every time he comes upon a name in “War and Peace”, he doesn’t know what to make of it. Moreover, the names don’t help him understand the story; i.e., who is doing what to whom, etc. So he calls the names “junk”, and just tries to make the most of understanding the novel as best he can.

The other problem is that on his world, the concept of philosophy doesn’t exist in prose, only narrative. As you may know, “War and Peace” contains long sections of philosophy interspersed throughout its narrative. The scientist from another world is not able to recognize these very long passages as having any meaning whatsoever. Again, he calls them “junk”, and concludes that, taking into account the names, and the philosophy, somewhere between a third and a half of the novel is nonsense. To him, it has no meaning (although to us of course it does). Let’s say that  another, more intuitive and less analytical member of his species (let’s say a female!), were to suggest to him that perhaps the novel did not come about by purely mechanical processes, but was actually composed. He would scoff and ask her, “If it were composed, why would it contain so much junk?”

On this world, short sentences become longer sentences, and onward and upward, by a series of mutations. These happen for no other reason that thatthey just do, because the duplication process is not 100% accurate. However, each mutation, for it to survive, has to conform to the same selective criteria, the “laws” of this planet; it must mean something. So let’s take an example of a very common error, both in our own writing, and on this hypothetical planet. Let’s say a comma accidentally reproduces as a period, in the sentence, “When I left the office, I was very tired.” Due to the error, we now have two new, shorter, “sentences”:

When I left the office. I was very tired.

You can easily see the problem. The first sentence does not obey the rules of grammar. It doesn’t make sense. Therefore, it is rejected. We are left with the much shorter, and less informative sentence, “I was very tired”. This represents a loss of information, hardly unusual on this world. Loss of information is, as you may guess, by far the most common result when a mutation occurs, since they are random.

On the other hand, it may happen that two mistakes can occur at the same time, which effectively cancel each other out so that no information is lost, or even that new information is added. For example, the capital W at the beginning of the word sequence could erroneously reproduce as a capital T, at exactly the same time that the period subs in for the comma. In that case, you’d have:

Then I left the office. I was very tired.

This is new information, and because it makes sense, it reproduces. We have now added to the pool of available sentences on this planet. Still, to be truthful, the information has changed only slightly. To get from really simple sentences all the way to stunning prose – to “War and Peace” -  these positive mutations have to occur millions upon millions of times, and only the mutations that make sense, each step of the way, can go on to reproduce and be a part of the evolution chain from sentence to paragraph, and so on.

In other words, if we want to go from a sentence in a child’s reader, such as “See Jack and Spot run”, to this line from “War and Peace”:

we can’t have something like: See Gazing into Jack Spot, eyes Prince run mused, etc.

That may be considered a crude link between the two, but it can’t survive, because it doesn’t meet the fitness requirement of this planet. It makes no sense. We would need to have something like this:

See Jack gazing into Napoleon’s eyes, musing on the unimportance of greatness, which Spot can not understand.

Hardly beautiful prose, but it does make sense. Remember that beauty is entirely irrelevant on this world, as nothing is even aware that it is doing anything. The natural laws of the planet are simply operating, and the only thing they require is meaning.To make it even more complicated, even to the precise step before we see the longer sentence emerge, long after Jack and Spot have been abandoned, we can’t have the sentence go haywire at the end, and finish with, “….which no one alive could understand on explain”. If that happens, the entire sequence may end up being rejected. Clearly, moving from a simple sentence to a very complex, and more meaningful one, is a very, very, very,very iffy business.

Now you know how “War and Peace” can write itself! You also have a fairly workable analogy for how Leo Tolstoy himself, in all his genius, came to exist without any “creator”, in the absence of even the tiniest iota of consciousness;  with nothing more than natural laws playing out over a few billion years and trillions of mutations, beginning with a chemical reaction that took place in the distant past that resulted in a self-duplicating piece of matter. All things, from a grizzly bear’s biceps to Leo Tolstoy’s incomparable mind, in fact every living thing and every part of every living thing, are merely variations on that first chemical reaction.

You are forgiven for finding that hard to believe. You are forgiven for thinking that no matter how many monkeys you have banging on typewriters, and being rewarded with bananas only when they type something that makes sense, you are never going to get “War and Peace”. Personally, I don’t think the universehas that many bananas! However, those who are convinced that the emergence and evolution of life on Earth can be fully explained as a result of natural selection by random mutation will adamantly disagree with you. They may even call you deluded, for imagining that if there’s a novel, there must be a novelist.

Oh, how could I forget? “War and Peace” is a Russian, not English novel. Not to worry. On my imaginary world, novels have even learned to translatethemselves! You now have a glimpse of the incredible world of the genetic code. But that, my friends, is another story.