The Politics of Spanking 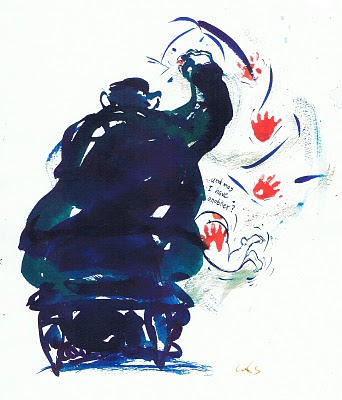 This article is reproduced from Planet Pov, a progressive website. It was written by my good friend, Stefanie Lindahl, with accompanying illustration by me.

Proverbs 22:15: "Foolishness is bound up in the heart of a child, but the rod of discipline will drive it far from him."

I was once spanked in public, in broad daylight... and as an adult.

The spectacle happened umpteen years ago.  It included me, my boyfriend, a New York City backdrop, and a Greek chorus of anonymous boys from the hood.  To add to the romance, the chorus appropriately consisted of rappers.  My boyfriend and I were  walking along, I  must have said X Y and Z , when suddenly he spun me around and discharged three perfectly executed rapid fire smacks on my patootie.  Dazed, I turned only to see said chorus approaching, grinning, with one of them rapping the words "Slam Slam Cinderella.”   To add to the surreal quality of the event: I didn't feel humiliated.

Ever since that incident I've thought about what spanking  means in general.  The politico-bio-psycho-sociology of spanking became a compelling topic, fueled by this ambivalent reaction of mine and the overall ambiguous nature of pleasure/pain, notions of feminism, humiliation, attention, punishment, anger, and fetishism that can come from being spanked.  I can’t remember ever having been formally spanked as a child and so I wondered how those who were routinely spanked as children are later affected; even to the point of what sort of political choices they might make.  Could there actually be a politics to spanking in our nation's family?

Some form of innocuous spanking exists throughout the human life cycle.  The archetypal smacking on the bottom of a newborn is the first zen slap when life says “OK, now contend”.  It may continue as a  possible item on the retribution menu through childhood and then into adulthood usually assisted by a proxy, e.g. the salvo of a snapped locker room towel.  On the fun end, beyond it being the seat of punishment both mock and real, the bottom cannot help but be erogenous.  It is served by the same plexus of nerves which serves the flip side.   Moreover,  since the nerves are deeply buried beneath fat and muscle, it requires more than just a soft brush to activate them. It requires the solid, nearly Puritanical work ethic of a focused and penetrating spank.  To spank is to pay attention. It forms a percussive connection between the two cheeks, either of the two hands; the locations of both that can be adjusted to maximal variety.  The invisibility and possibly imagined anonymity of the spanker, the faceless, non-witnessing aspect of the spankee.  It is dramatic and holds a certain degree of theatricality that has not gone unexploited in cultures worldwide. Spanking can be fun even if done in public.

After the Chinese New Year is a week long affair which culminates in light spanking of the men and light whipping of the women to expunge bad luck.  In Eastern Europe,  boys chase girls in the Spring sprayng them with perfume whereupon the girls tagged with scent in turn chase the boys to issue their spanking revenge.  Egypt  may have been the birthplace of the birthday spank as it was intended to prepare the body for the afterlife.  And you can bet your bottom dollar Ancient Rome had "Spankatoria".

But there is the sinister side to spanking which affects the US today.  Spanking is still a vestige from the pre-sixties mentality of disciplining children coming mainly from binary-thinking right/wrong authorities who do not believe in the relative merits of talking through and time-outs.  Research has shown that spanking children as a punishment based on pain and humiliation is a typically Republican activity.  Democrats tend to choose time-outs and discussions.  The right wing, moreover Conservative Protestants, whip asses and tend to dwell in appropriately “red states”.  Research has shown this to be true.  The power of control, the need for hierarchical dominance, the unwillingness or incapacity to talk through a transgression  whereupon "justice" is measured and evidenced by tears.  In the days before Child Protective Services, that is to say, in the days of Tea Partier childhoods, spanking was the norm.  If liberals tend to talk and conservatives tend to spank, what does this mean?

Repeated spanking  of a child is a reinforced connection  between a parent, who is supposed to love, and the “bad” child.   This inherent cognitive dissonance creates a conflict which needs to be integrated somehow into the psyche. Some may go on to eroticize it, but many  will develop a view of distrusting authority and identifying with the aggressor.  By identifying with the aggressor the displaced conflict ends up in subsequent spanking of the "weak" and, indeed, masochistic "self-spanking" since so many of the spanked ultimately vote against their own best interests politically.   For a butt regularly spanked will sculpt the brain’s neurobiology to dedicate more brain area to represent "butt" and if the spanking is linked to conservative views of right/wrong, good/evil, then the brain becomes  a bio-political hostage to the butt.  Beyond a brainwashing there is political brainspanking.  .

If families are the first form of government then James Dobson's "Focus on the Family" type  is the first experience a child brought up in a traditionally Conservative home has with government as a truly intrusive and noxious entity.  “Painful enough” spanking according to Dobson, is a necessary practice to teach right and wrong because kids "just want to feel free to do what feels good" and "feeling good" is, in a word, liberal.  Fortunately, Dobson recommends not spanking a child under fifteen months, but some Conservatives advocate spanking from birth.  It would make perverse sense: good disciplining at birth means good fiscal discipline later when  kids enter the free-market.  But spanking doesn’t stop there.  What if you don’t succeed in the capitalist system?  Then you weren’t disciplined.  Not disciplined? Then you’re not moral.  Not moral?  Then you deserve to get punished: >>Spank<<. You deserve to be in poverty >>Spank<<>>Spank<<, without prospects <

Yet the basis for democracy is fairness and freedom and these moral values are predicated on empathy.  Fairness and freedom should exist for everybody and not just those in authority. Yet fairness in a certain sense goes unrecognized and freedom is by and large corporally punishable in the Conservative home.  Forget "pursuit of happiness" which is a higher order of approximation and one that can only be based on fairness and freedom in place and fully operative. These values have been spanked out of our country because of a long-standing conscious and conscientiously spanking by the right wing.  It is best evidenced by the fact that many conservatively leaning people vote against their own self interests, masochistically punishing themselves to substandard lives and sadistically punishing the next guys down the totem pole, usually immigrants and minorities.

How did this happen?  The short answer is, working class liberals who were strong on family values and who probably spank and were spanked (even Dr. Spock was an advocate of spanking at a time) made Conservatism their identity after the sixties spanked them with feminism, civil rights and war protestations.  It extended far beyond values and into the fiber of how they see themselves in the world.  In addition, the idea of "liberal elite" was concocted and the recognizable party demonized.  Hollywood made fly-over country the butt of jokes and so the poorer liberal was spanked by the enlightened, educated and emancipated liberal at a time when the right wing had strategically placed the seed of "the liberal elite" as bogeymen into their mindset.  With a sense of a strict father-run family already in place, the working class liberal opted out and has been brainspanked ever since by the highly structured and organized conservative message spreaders including the right wing-run media.  The reporters may be liberal but the messages, the linguistics and words are straight out of a right wing dictionary.  The simple and repetitive messages are so amenable to be like spanks: "Death Panels! Death Panels! Death Panels! Government Takeover! Government Takeover! Government Takeover!" and so on.

The empathic father and mother in our nation's family are not recognized.  The father who listens and at most gives time-outs, who expects enlightened discourses on policy (like our President), who care about protection through consumer rights, workers rights, affordable health care is seen as  socialist Kaiser Söze.  The brain that went un-spanked, that stayed all-brain and continues to communicate the truth in all-brain language about caring, something that exists on a visceral plane, will never be able to compete with the spanked brain that has made that exquisitely trigger-able connection between brain and butt.  If the best the left can do is smack trolls on places like Huffington Post then it needs to up its game.

Regaining the balance requires those on the Left to understand several things: 1). The need to connect and communicate on an emotional level which means giving a straight-out narrative of the truth without fear of "playing dirty" like the other side; 2). Appearing authentic and unscripted, a "I'm like you" tack and not a "you can't even spell right, you hillbilly" one; 3) Describing the core values of America, including moral ones like available and affordable health care since life and death are moral issues, issues that supplant whether gays are allowed to marry, or any other "moral" red herring issues dangled before us by the Right Wing; 4). Engendering trust (eventually) so the 5) Identity can be re-established as one which is aligned with its own self-interests.

Slam Slam Cinderella.  This spanked,  impoverished, working class girl of a nation amidst the ashes of her own defeat has choices of godmother.    Hopefully, it will be the one who isn't part of a fairytale.