Being There With Miss Teenage South Carolina 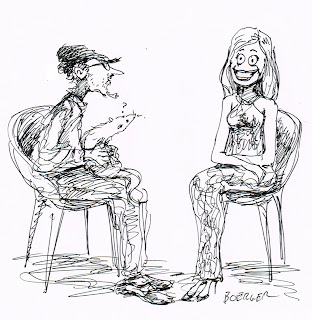 An interviewer, and his ferret, from The Socialist sat down for a brief chat with the former Miss Teenage South Carolina. She set off a firestorm a few years ago when she used a softball question from a panelist to unleash a scathing indictment of American activities both at home and abroad. She graciously accepted our request for a brief interview that left this interviewer more convinced than ever that she is one of the true voices of sanity in this day and age.

TS: Miss Teenage South Carolina, thank you for joining us today. Nearly fifty million views on Youtube....that's; well that's massive exposure. What are you going to do with that level of celebrity? How can you use that as a force for political activism and change? And was that your plan all along, or were you just sort of channeling the voice of resistance without realizing it? Like so many other socialists before you, was it the power of the movement itself, using you to bring about change?

MTSC: I personally feel that the reason that so many millions of U.S. Americans and other country peoples and such as watched that video is because it is always good to see pretty women with beautiful smiles talking about important discussions like maps and education and such as. I don't understand the second part of your question but I have always been very social.

TS: You went further than any other beauty contestant ever has in pointing out the hypocrisy and lies of the corporatist-fascist state. When you answered the question about the United States by mentioning 'The Iraq', you went there! You pointed out that there really IS no Iraq anymore, in terms of being a sovereign state. It's just part of the U.S. Has anything that has happened since then changed your view about Iraq, or do you still maintain that it has virtually no autonomy and is just a U.S. owned oil state?

MTSC: I personally believe that the reason for such as and in The Iraq, today, and the need for more maps so that people over here, in U.S. America can tell the difference between The Iraq and The Iran - and also not just maps, but also spelling, like such as the difference between 'q' and 'n' and such as, so that U.S. Americans can build our future for our children betterly.

TS: That's pretty much it, right there, isn't it? Americans tend to lump those two countries, and all the Middle Eastern states, into one homogenous mass. So yeah, we are sorely lacking in our education, clearly. And it was brave of you to point that out. And I think the corporate state likes it that way. They don't want people to know what's really going on, of course.

But let's go back to something else you said. You also, in that comment, mentioned 'South Africa'. Now, I don't think it was lost on many people who heard that that you were speaking as a representative of South Carolina. In other words, you, as someone who grew up in the Deep South, were clearly likening it to an apartheid state. But not only that, I really felt that you were identifying yourself strongly with the cause of people of color. It was as if you, yourself, were referring to yourself, and all Americans, as 'Africans'.  To what degree did your interest in science inform that statement? When I heard it I assumed you were pointing out that the human species began in Africa, and that everyone, deep down, IS 'African' in that our genome developed there before we began to spread out. Was that what you were implying?

MTSC: It is my personal belief that South Africa, and such countries as Nicaraqua and The Belgium and such as, should go to The Africa, and also The China and Hawaii and all other countries, so that we can know each other better and give each other maps and be happy together for our children. We should also go to Disneyland or Disneyworld together. With our children.

TS: "It's a small world, after all", in other words. You seem to speak with equal parts deep and justified cynicism, and what I see as a touch of idealism in you as well. You are optimistic, it seems. Am I correct in that assessment?

MTSC: No. I have my eyes checked regularly, and they are fine.

TS: Got it. Eyes wide open, huh? Well, I wish I could disagree with you there, but actually I think you are spot on. You are perhaps the only person in your position who is willing to point out these realities. Maybe get them across to people who otherwise would never even think about them.
This has been a fascinating discussion, and I feel like we could just go on and on. But talk is really getting us nowhere, is it? So I think it's time that we both got back to our lives, and the cause. Just before I let you go, what sort of activism are you most in support of these days? Last word.