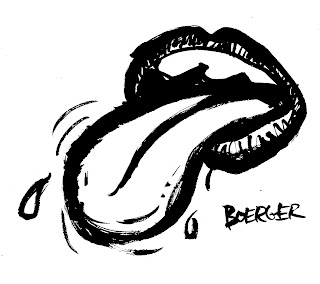 Interviewer: Unless you've been living under a rock, on Mars, without wifi, you know that the biggest news in the entertainment world over the last few days has been Miley Cyrus' tongue's brave decision to come out, on stage, before millions of viewers, at MTV's Video Music Awards. And then come out again. And again! Miley's tongue has consented to join us for an exclusive interview. Tongue, thanks so much for being here with us today.

MT: Sure! My pleasure!

Interviewer: Would you tell us a bit about the process behind your blockbuster reveal? What made you choose to come out at the VMAs?

MT: Well, I guess the biggest reason was the 'twerking' thing. See, I knew that that Miley's Butt was going to be getting a lot of attention, and I was afraid the booty shaking was just going to swallow up everything else. I've never been one to suck up to anyone, or to kiss ANY body part (well, not in a figurative sense), and so I just felt like it was my time to make my stand. You know, like, 'you want it? Take it away from me, bitch" And I have to say, I think I licked her pretty good!

Interviewer: Tongue, I think a lot of people who watched were surprised by how many times you came out at the show. What was that about? Was it that liberating?

MT (laughing): That was unplanned. In fact, I have to admit, it was a bit of a 'lip malfunction'. See, when I first came out, just after Miley stepped out of the giant teddy bear robot, I thrust out with a bit too much force. Miley's lips just kinda flew open after that, and she couldn't keep them shut. So, I just kept on popping out.

Interviewer: Wow, that must have been embarrassing for all concerned. I know it was for the audience! Is Miley okay now? I mean, are her lips back in place?

MT: Sure! Miley's fine. The lips are fine. But they're, like, Sooo jealous of me now. I mean, let's face it, after that performance, I'm the one who's got everyone's tongues twerking!

Interviewer: You are indeed! They say all publicity is good publicity, but Miley's performance has received heaps of criticism. It seems that a lot of other celebs, her parents, and even Robin Thicke, with whom you performed on stage, just felt like things got a little OTT. You, being such a big part of the overall performance... how much of that are you willing to own? Do you think you pushed the envelope a bit too much?

MT: Hell, no! I didn't push, or lick, any envelopes! Or stamps! I'm a grown up tongue, and a major star. If I can't come out without a bunch of people getting all weird about it, then I, like, blame society!

Interviewer: There you have it, folks; Miley's tongue, defiant and unashamed. Any last words for your millions of fans?

MT: Follow your dreams! Don't be afraid to stick out!
Posted by andyboerger at 15:55