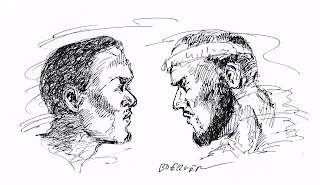 What could turn out to be one of the all time great sports rivalries is shaping up quite nicely now in the NBA. It's a good bet that the two teams that faced each other in last year's Finals will find themselves back at it again this June. If that scenario unfolds, it will be largely due to the extraordinary, historic and downright otherworldly brilliance - on a nightly basis - displayed by the two teams' best players, The Miami Heat's Lebron James and the Oklahoma City Thunder's Kevin Durant.
It all begins a little more than a year ago, when James began making up for his disappointing - some would say disappearing - performance in the previous season's Finals by sculpting a season for the record books. Lebron won just about everything worth winning that year; MVP (his third), a Finals championship, Finals MVP award, and an Olympic Gold Medal. Only one other player in history, Michael Jordan, can boast of a season with that same combination of accomplishments. And then Lebron topped it off by winning Sports Illustrated's "Sportsman of the Year" award. As Frank Sinatra might put it, it was a very good year.
Could he one-up himself the following (this current) season? Probably not, simply because there are no Olympics this year. But he has hardly been slacking. So far this season, he has reached two major milestones, 20,000 career points and 5,000 assists, in the same game. The 20,000 points are more important from a records perspective, because he became the youngest player in NBA history to achieve that figure. But the assists are significant as well. Having already brought his rebounds career total to 5000 the previous season, on that day he became one of only twelve players in league history to have achieved 20,000 points, 5000 rebounds and 5000 assists in a career. He joined that Club of Twelve at a younger age by far than all its other members. Considering that he is possibly only at the halfway point of his career, those figures - and the potential of him nearly doubling them before he retires - are well beyond remarkable.

Meanwhile, Kevin Durant is making his own kind of history, and at the tender age of 24 no less (for comparison, Lebron turned 28 last December). Durant, a seemingly unstoppable scoring machine, is currently leading the league in scoring average, and is likely to finish atop that list. If he does, it will be the fourth consecutive year he has accomplished that feat, and - there's that name again - only Michael Jordan has done likewise. In addition, he is likely to end this season with a magic number, to NBA stat geeks, anyway. 50-40-90. What that stands for is fifty percent (or above) accuracy by shot total, to go along with forty percent or better from three-point range, and an astounding ninety percent or better from the free throw line. Only five NBA players have achieved this, and only the legendary Larry Bird has done it (twice) with anything approaching the amount of points that Durant is averaging this season, just under thirty per game. It follows without saying that Durant is in strong contention - currently the favorite (James is second, of course) - to win MVP honors this year. He can have a season nearly as spectacular as James' of last year, IF he finishes the season with the scoring title, joins the 50-40-90 club, takes the MVP trophy and manages to win Finals MVP by leading his team to the championship this time. Does KD have the talent and ability to knock off a season like that? Undoubtedly; he is already establishing himself as a legendary player. But it's still a pretty big 'if', mostly because of the equally gifted rival he'll need to best to reach that goal.

James and Durant like each other. Unlike the NBA's most famous rivals, Magic Johnson and Larry Bird, who nurtured a career-spanning antipathy toward each other that went back to their college days, these two are comfortable as friends off the court even as they are determined to get the better of each other when on it. For two off-seasons in a row, at James' invitation, they have worked out together, pushing each other to better themselves as only the two best players in the sport can do. Durant is clearly learning from James. Though he is still primarily a scorer, he is getting better at the types of things that make James the most complete player in the game today. Durant is passing more, and better, than in previous seasons. He has improved considerably on defense. He will probably never have the same phenomenal all around skills set that James has, but then neither will James probably ever acquire his magical scoring touch. He has improved so quickly and is still so young that overtaking James as the best player in the game seems distinctly possible in the next two or three seasons. A sizable minority of fans would say he's already there, and their numbers are sure to grow. Lebron definitely feels the heat, as he admitted in the Sports Illustrated article that announced his selection as 'Sportsman of the Year'. "I know there is someone, somewhere, trying to take my spot", James told the interviewer. "And I know where he is, too. He's in Oklahoma. He's my inspiration because I see the direction he's headed, and it's the same direction I'm headed. I know his mindset, and he knows mine. It's a collision course."

This is a collision course that sports fans should savor, because we may be seeing two of the ten best players to ever play the game going at one another for the next six, seven seasons. Book them for this year's Finals.
Posted by andyboerger at 22:31