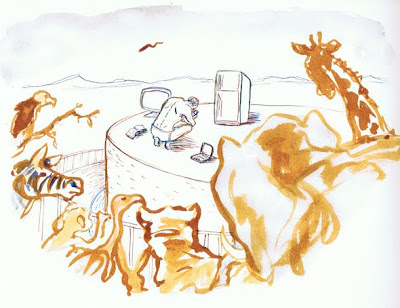 “If the bee disappeared off the surface of the globe then man would only have four years of life left.”
- (attributed to)Einstein

My morning yesterday was like so many others, riding a crowded train out from suburban Tokyo to neighboring Yokohama for work. As usual, I would have to wait several stops before managing a seat. So as I stood in the cramped aisle in front of a row of seats and watched the scenery change, I happened to glance over at the kangaroo standing next to me. He was reading The Kangaroo Times, and, since I don’t read Kangaroo, I could only get the barest notion from the photographs of what seems to be the chief concerns of kangaroos these days. Some sort of major kangaroo sporting event is going on, as well as what looks to be some sort of territorial dispute in a place I assumed to be part of the Australian outback. When he noticed I was poking my nose into his newspaper, the kangaroo seemed a bit miffed, and ever so slightly folded his paper as if to demonstrate to me it was off limits. Not wanting to make a kangaroo angry, I quickly looked in the opposite direction and found something frightfully interesting about the ad for after shave lotion above the luggage rack.

I’m not quite sure which is more absurd; the scenario I just described above, or the fact that for the vast majority of human beings alive today, nothing even remotely similar will ever occur for them – an encounter with another species of animal, in both creatures’ natural environment, on equal terms. We have fashioned a world that has become so people-centric that some of us go through whole days without ever seeing another species from the animal kingdom. Those of us who don’t have pets might go a few days without even thinking about other creatures, aside from the eating of them. Many will not regard the food before them as a once living animal. Hamburgers and chicken nuggets so completely disguise the fact that This Once Breathed that it is as if food originates in supermarkets and restaurant kitchens. No other species lives like this on our planet; so isolated, so disconnected from other creatures. A hefty toll is being paid for this, I believe. In fact, I believe that one of the main reasons there is so much alienation, depression and other forms of mental illness plaguing the human species is because our relationship to our fellow creatures has become so distorted. We are a lonely species.

To see this loneliness given expression, we need only look at children’s stories and entertainment. When I was a child, my television friends were Bugs Bunny, Foghorn Leghorn, Daffy Duck, Scooby Doo and Bullwinkle. Especially Bugs. Now, Bugs is a funny fellow, as are the other characters I loved, but he’s nothing like an actual rabbit, even in appearance, is he? Why even depict him, or any cartoon character, as an animal? Why Mighty Mouse, Woody Woodpecker, Eeyore, the White Rabbit, etc.? Couldn’t they all be people? They basically are people, just ones wearing funny animal suits.

What does this tell us? That we long to reconnect to animals. We miss them, and as long as we do, we’ll insert them into our culture any way we can. On greeting cards, calendars, animated programs, children’s book illustrations, T-shirts, etc., etc. We’ll also put them in zoos, basically prisons for innocents, and go to gawk at them in an odd and wholly inappropriate gesture of reconnection. Our popular culture indicates a deep yearning within us to restore something beautiful that has been lost.

To be sure, the reasons for our isolation are clear and reasonable enough. Animals threatened us. Whether lions, tigers or bears, whether locusts, snakes or scorpions, whether disease carrying rats, flies or birds, we built our cities and homes to shelter us from the danger so many of our fellow inhabitants of this world presented. But we’ve gone too far. We have created a sterile, barren environment. Wherever you are, sitting right now and reading your computer screen, try to imagine this same spot of land five hundred years ago, and for tens of thousands of years before that. It was very likely a lush forest with a vibrant, cosmopolitan atmosphere of squawking, hiding, howling, hunting, slithering, jumping animals. The land pulsated. The animals had an alertness we can only dream about, knowing that every move they made or failed to make could be fatal. In this threatening world of predators and prey, still they managed to mate and raise children. Surrounded by creatures utterly different from them, they shared and persevered. Consciously or simply instinctually, they participated in life, just as their descendants still do in the vast but ever shrinking expanses of forest that yet survive on our world. But for us, our world has been reduced to slabs, boxes, and slick surfaces. We see a spider or cockroach run along our walls, or a line of ants moving back and forth across our floor and we nearly freak out. “EWwww! How did these animals get in here?”

Our isolationist course has taken us to, and perhaps beyond, the tipping point. The latest hypothesis to explain the disappearance of honey bees in some parts of the world is that mobile phone “noise” is disrupting the bees’ homing sensors. Once they leave the hive to gather pollen, they can’t find their way back. The hives die. It’s hard to proffer a more essential species than the honeybee. Most of the world’s crops depend on them for pollination. So, will it be mobile phones that ultimately do us in? If so, I see a profoundly sad irony in that. Our isolated, lonely species, robbing the planet of its life force, while we go on chattering, chattering, chattering among ourselves.