S'cuse Me While I Kiss The Sky 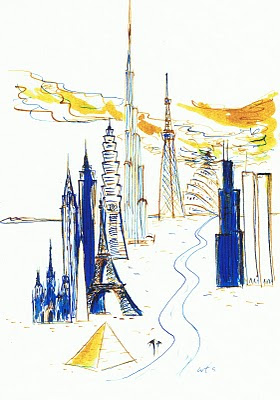 “That particular sense of sacred rapture men say they experience in contemplating nature- I’ve never received it from nature, only from. Buildings, Skyscrapers. I would give the greatest sunset in the world for one sight of New York’s skyline.”
- Ayn Rand

For all the disruption the largest earthquake to hit Japan in 300 years caused, the one thing it didn’t bring to a halt was the erection, to full height, of “Sky Tree“, Tokyo’s replacement for the now-too-short Tokyo Tower broadcasting tower (in the Roppongi district, which has recently been built up with skyscrapers that nearly reach its height, blocking its transmission capabilities). Yes, construction workers were way, WAAAY up there in the sky when the quake hit. I bet they felt it. But that didn’t stop them from going back up, day after aftershock smitten day (some of which felt nearly as frightening as the first – and that’s at ground level!) during the following week, to bring the sleek behemoth up to 634 meters (that’s 2080 feet for those of you who don’t want to bother with the metric system), and bragging rights as the Second Tallest Thing Ever Built by Man. That particular number is significant, as 6,3,4 can be read as Mu-sa-shi, which was the name of the largest castle town in the region before Edo transformed into Tokyo, the nation’s capital, and eventually incorporated its neighboring towns.

Sky Tree probably won’t hold that #2 distinction for very long, however. It only beat out Canton Tower by 34 meters, and taking into account China’s nonstop building boom, it likely won’t be very long before they slap up a tower, or even a building, even taller. #2′s kinda boring anyway, right? What it never even had a chance of becoming was the Tallest Thing Ever Built by Man (or TTEBBM), which, as many know, is The Mother of All Skyscrapers, the “Building of the Century”, the one and only Burj Khalifa (during its planning and building it was known as Burj Dubai), which rises a staggering half-mile into the sky (828m,2717 ft). Now, height is a relative thing. After all, if it were a natural feature of the geography, people would debate whether it should be called “Mt. Khalifa” or just “Burj Hill”. Nevertheless, what makes B.K. so impressive is not just how tall it is, but how much taller it is than the previous holder of the record for world’s tallest building, the supertall (a term used for skyscrapers above 300m) Taipei 101, which rises to a comparatively pip-squeaky 449m (roof height; with its antenna it clears 500m). In other words, the Big B.K. nearlydoubled the height of its rival.

When was the last time that happened? That would be 1889, March 31st, to be exact. That is the inaugural date of The Eiffel Tower, the main attraction of the Paris World’s Fair of the same year. Amazingly, the 324m (1063 ft) architectural/engineering triumph was slated to stand for only twenty years. Yes, what is still today one of the best known (and often imitated; the original Tokyo Tower was designed to be a near match) structures in the world was intended to be only a temporary feature of the Paris cityscape.

The structure that the Eiffel Tower nearly doubled in height to claim the title of TTEBBM from was The Washington Monument (169m, 555 ft). Construction delays (caused by, among others, The Civil War) supplied yet another humbling experience for the Monument. Not only did it barely come up to the kneecaps of its Parisian rival, it finally reached its completion on October 9th, 1888, meaning that it only held TTEBBM bragging rights for just shy of half a year!Sacrebleu! Freedom Fries, anyone?

Interestingly, there are two other cases in modern history of a TTEBBM quickly being bested by a rival before the paint barely had time to dry. The Chrysler Building (319m, 1047 ft) took over the title from the Eiffel Tower (which was less tall at the time; it has since been topped by an antenna), and then handed it to Midtown neighbor, The Empire State Building (443m with antenna, 1454 ft ), a mere year and seven days later. The Chrysler Building can, however, cling to another distinction. This was the first time in recorded history when the height of the structure was due to function, not display. Unlike a monolith or a cathedral spire, there were actual offices going nearly to the top, where people could work, stare out windows, get nosebleeds, etc. This trend has repeated up until the present day, where the TTEBBM has been either an office building or a broadcasting tower.

The Eiffel Tower had stood proudly as TTEBBM for just over forty years. The Empire State Building would do so for almost exactly the same amount of time. But such would not be the fate of the building(s) that surpassed it. The ill-fatedWorld Trade Center ( 526m, 1727 ft with antenna on WTC 1) snagged the title in ’71, and was summarily bested by The Sears Tower (now known asWillis Tower ) in Chicago, less than two years later. The 527 meter (1730 ft, antenna height) new champion retained bragging rights from ’73 until ’98 (until which time all five of the world’s tallest buildings were located in New York and Chicago), when the Asian Building Boom started getting into full swing. Up rose the Petronas Towers in Kuala Lumpur (which never really passed the Willis Tower, but got by by on a weird structural technicality – its antennas were actually included in its spires), and then the Taipei 101, which brings us up to date. Nowadays, nearly all of the tallest buildings are in China, many in just two cities, Shanghai and Hong Kong. And then there is the Burj Khalifa, in a class all by itself.

It wouldn’t surprise me if the Burj ends up holding its title as long as The Eiffel Tower and Empire State Building did. Oh, I imagine that broadcasting towers may surpass it, but not an actual, inhabitable building, I’m guessing. Certainly not in today’s economic climate. The Burj is, in some respects, a white elephant (even the name change was caused by Dubai needing to borrow money from its neighbors in The UAE) to begin with. Imagine the burden, and folly, of building something even taller!

Inevitably, however, someone will. in 1956, Frank Lloyd Wright proposed a building for Chicago, dubbed The Illinois, which would rise to a full mile in the sky, nearly twice the height of The Burj (which bares a striking resemblance to Wright’s drawings of The Illinois). Just as some people have to climb mountains, others, it seems, have to build them.

It is doubtful that any building will ever again hold the title of TTEBBM for more than 4000 years, as did The Great Pyramid of Giza (146m, 480 ft). The Pyramid finally lost the title to the Rouen Cathedral (151m, 495 ft), which was completed in 1880, six hundred and seventy eight years after its cornerstone was laid. The Great Cathedrals of Europe were the architectural wonders that stoked the imaginations of builders everywhere, ultimately leading to the Eiffel Tower, The Chrysler Building, The Burj Khalifa, etc. The Giza Pyramid, however, is certain not to care about the showy upstarts that have one-upped each other, year after year, century after century. It holds its position majestically in the Egyptian desert, timeless, ever mysterious, ever directing our eyes, and spirits, upward.