I'm You; Kanye, Lebron and the Cult of Celebrity 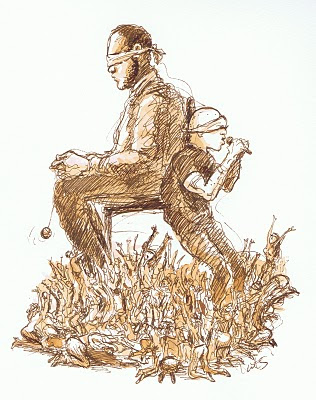 My name is Ozymandias, King of Kings:

Look on my works, ye mighty, and despair!

Am I the only one that's not crazy here?

In the solipsistic universe that Kanye West inhabits (in which he is Kanye West, and we are not) he has been done an injustice. By Taylor Swift. Yes, the winsome VMA award winner who stood, dumbstruck, as Kanye jumped on stage, grabbed her microphone from her as she was giving her acceptance speech, and proceeded to let viewers know that he felt the award was undeserved, and should have gone to Beyonce instead, has not gone to bat for him in the year since. "Taylor never came to my defense", he lamented, toward the end of a very bizarre soliloquy he ad-libbed at the end of a concert at the Bowery Ballroom in NYC earlier this week. In the nine minute rant, Kanye had plenty of other gems to offer his adoring audience as well. Hastening to assure them that "I never talk about the numbers", he proceeds to do just that, bragging about the sales of his recent album, (100,000 the first day, digital alone, 650,000 projected in the first week, without a #1 single - just some of the numbers he never talks about); defending former nemesis George W. Bush, portraying him as equally "villainized" as Kanye himself by a rabid media always looking to tear people down, etc. He tops it all off with the humble admission that, "I can't be your role model. I can't be your savior. I can't be your antichrist". Personally, I was thinking to myself, "well, that's a relief, because I wasn't really counting on my savior being a boorish, loutish, self absorbed egomaniac to begin with".

But that's just me. For their part, the audience gave him the requisite dose of adulation, even as his rabbit-hole speech took them deeper into his child's brain mentality about the world. Like the frightened adults in that classic Twilight Zone episode, who heaped only praise upon the terrorizing bully child who otherwise would "send them to the cornfields", Kanye's fans shouted out affirmations and gave their applause to his every utterance, no matter how bizarre they increasingly became. And why wouldn't they? In our celebrity-obsessed culture, why should we use our own minds to decide if what we are hearing is egotistical drivel or words of wisdom, even "salvation"? He's famous, after all!  If his words seem weird and hard for me to make any sense of, if they seem to go against my own ideas about what is and isn't proper behavior, the problem is obviously with me. I'm not the one who's up there on stage. I'm not the one who never "talks about the numbers" of my mega-selling records. In the presence of a genius like Kanye, my own conventional assumptions need to be checked at the ticket gate.

Meanwhile, for self-proclaimed "king", Lebron James, things are not going according to plan. Ever since his nationally televised (and widely watched ) "Decision" (which I suggest should heretofore be known as "The Derision") to bolt his home state of Ohio and head for Miami to join fellow superstars Dwayne Wade and Chris Bosh in pursuit of multiple NBA championships, the wheels of karma seem to be churning as if propelled by a benzedrine popping lab rat to bring "the chosen one" down to earth. A week from now he will be returning to Cleveland, and the team he jilted, for a match-up between his Miami Heat and his former team, the Cavaliers. And the Cleveland fans are going to be rabid! Never has a local hero fallen in stature faster than this "traitor", and the boos that will fill the stadium from the second he exits the  locker room to the second he heads back in again, surrounded by security, will be deafening, a cathartic primal scream from a fan base that had placed their hopes and dreams and aspirations in him, who had believed him when he proclaimed as an eighteen year old rookie, who had already appeared on the cover of Sports Illustrated, that he wouldn't quit until he reached his goal of bringing a championship to the city on Lake Erie that has known nothing but heartbreak and decline for decades.    And the moment will be all that much sweeter for his former fans knowing how disappointing this season has gone thus far for the would-be superteam. Currently standing a mere one game above .500, with a record not all that much better than that of the Lebron-less Cavs, the Heat players are well aware that they may very well lose that night, as derision rains down upon them and unprecedented hatred blasts James at every turn. Cleveland fans would probably prefer that the Cavs lose every other game this season in exchange for handing Lebron a humiliating defeat on his former court. The mayor of the city would be crazy not to declare the next day a city-wide holiday if they win. Adding an almost painful note of irony, a few years ago, when he was Ohio's favorite son, Lebron built a fifty million dollar home in nearby Akron, and is now probably the least loved person in the entire state. Will he shut himself up there, like Charles Foster Kane did, surrounding himself with phantoms and mirages?

The story of Lebron is similar to that of Kanye, one of unrestrained hubris that tunes out everything that doesn't speak of ones own personal greatness. At the tender age of eighteen, upon entering the league, Lebron declared as a goal that he become a "global icon",  as if unaware that no one in history has ever become a global icon by having that as their goal. He could say that with a straight face because his basketball skills had elevated a mere teenager to a stature that could only exist in a society gone screwy. The hatred being shown toward Lebron now is nothing other than the flip-side of the inappropriate and unjustified adulation showered on him by the working stiffs of northern Ohio and elsewhere as they built his ego up to Ozymandias-ian proportions. In short, it says more about his fans, and the American Cult of Celebrity they spring from, than it does about the man-child himself.  What did they want him to be, and why? What part of themselves did they transfer from themselves to him? Like Kanye, Lebron is nobody's role model, or savior, OR antichrist.  He's Icarus. And as his former fans watch with glee as he falls like a stone through the sky, one hopes they might remember that they are the ones who gave him the wings.