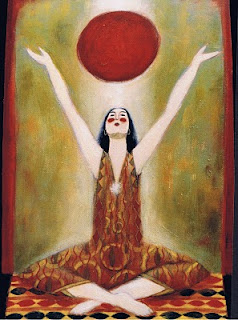 I am excited to be showing a group of eight of my earlier works, the majority acrylic, with one graphite and one pastel, for a month (October 15th to November 15th) at a great restaurant near ever popular, unabashedly upscale, Roppongi Hills. The restaurant is called Roti, and the Maestress Of Ceremonies is Lauren Shannon : writer, activist, chef, curator, teacher, and probably the busiest person in Tokyo! 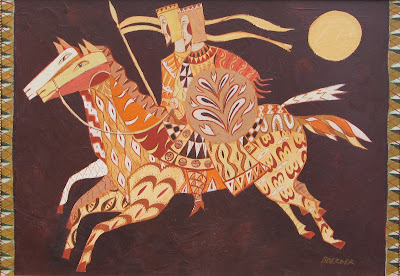 Here is what I wrote about the show for the postcard announcement ( the images shown above are the ones that will appear on it):
The show is called "Kings and Queens", as that is a subject that has long interested me. Whether it be playing cards, fairy tales, medieval tapestries, stained glass, etc. (the influence of all can be seen in this work) these archetypes touch me very deeply. They are not meant to represent worldly  "power over", but rather "power within", as I think that human life is foremost about attaining a higher level of being, and in that sense the royalty and mastery of a king or a queen are personal qualities within us that we should seek to cultivate, and that I wish these paintings to evoke.
Posted by andyboerger at 19:35