Change He Can't Believe In 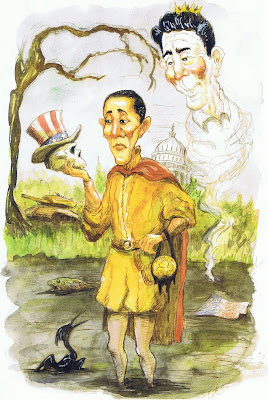 Well, Joe Biden was certainly right when he said that President Obama would be "tested" soon after taking office. The question is not so much "how did he do" on the test as it is, "when will the tests ever stop?" It is perhaps more accurate to look at these entire four years of the Obama administration (first or only) as an ongoing test, and one that grows increasingly difficult and challenging as it progresses, like the LSAT. Furthermore, much more is being tested than this still young presidency. The entire nation is being asked difficult questions about itself. Encapsulated into one question, what we are being asked is - As a nation, what are we?

- Are we a nation so divided by vapid ideologies that we can do nothing but shout at each other and hold those with whom we disagree in the utmost disdain, a disdain fueled by obnoxious purveyors of half truths and grotesque characterizations on our airwaves and our computer networks?

- Are we a nation that, forty years after Martin Luther King's "I Have a Dream" speech must nevertheless experience a form of shock that we finally, finally, have managed to elect a person of color to the highest office in the land?

- Are we a nation that truly can envision no other course for itself than to keep fighting wars and wreaking destruction, even as the jury is no longer out about how effective these military escapades are in actually solving the problems our country faces in its dealings with adversaries?

- Are we a nation so beholden to the economic powers that essentially run things in this country that we powerlessly bear witness to the destruction of two of our most valuable national assets, the American Middle Class and the Gulf of Mexico, conceding all responsibility to big, self serving corporate entities that have shown time and again that their interests are, charitably, clearly not prioritizing the health and well being of our floundering country?

In the middle of the fray stands President Barack Obama. Born in the last year of the postwar Baby Boom, campaigning with the invigorating, motivational catch phrases, "Yes, WE Can!", "Change We Can Believe In" and "The Audacity of Hope", his victory in November 2008 inspired and uplifted a large portion of the American public, many of whom had nearly given up hope that the trajectory of self serving government, and the decline of America's status globally, could ever possibly be reversed, particularly after eight years of a presidency that felt downright alien and Orwellian to them.

Yet, a few short months before crucial midterm elections, those catch phrases ring hollow. The Obama presidency, viewed as a whole has not delivered in a way that justifies their bold and cheerful optimism. Indeed, many, I'm guessing millions, of Americans feel deceived about those words, and sold out by this presidency. It is as if Obama never really, truly, understood the nature of the  "change" that the majority of the American people wanted so desperately to believe in.

I find myself asking, "Why did Barack Obama want so desperately to be president?" I am frankly stumped by this question. The question is much easier to answer when applied to his recent predecessors. Richard Nixon (a Shakespearean character if ever there was one) wanted the job because nothing short of that would satiate his monumental ego and lust for power. Jimmy Carter had an evangelistic and fervent belief that the country itself was far more decent and honorable than its leadership, and that its true heart and soul were crying out to be affirmed. Ronald Reagan was so driven by his Ayn Rand-influenced philosophy about government, capitalism and communism that he stormed into office as a True Believer, ordained, or so he believed, with the power to remake the country into a sort of real-life version of "Atlas Shrugged" (it is interesting to wonder if he, and not Gary Cooper, had landed the lead role in the Hollywood version of "The Fountainhead", that he may have gotten his  ya yas out that way, and spared the rest of us the consequences of his Objectivist wet dream). Bush the Elder and Bill Clinton were both convinced that they were the smartest guys in the room, and that nobody else was as capable as they were of running the enormous machinery that makes the world's most powerful country tick. And Bush the Lesser was just a frat boy who, his entire life, basically proved the Peter Principle, simply coasting along on the zephyrs of forces and connections far more powerful than him to increasing Levels of Incompetency.

I am quite certain that Obama did not become president, to, paraphrasing Churchill, preside over the demise of the American Republic as a great nation, and yet why does it appear that this is what he is doing? Is the job bigger and harder than he imagined it to be? Are many of his detractors right in proclaiming that he is in over his head, a "community organizer sent to do a president's job"? Are the problems our country is facing too large and complex and metastatic for any leader to make headway against them? Is our president, like Hamlet, caught up in such a swirl of dark doings that he can only retreat into a cool, calculated inertia? At a time when the economy, the war in Afghanistan, the environmental catastrophe in the Gulf, etc.  - nothing is going right, does anyone really believe that this hesitancy to seize the zeitgeist and place his stamp upon it is a matter of him "playing chess" and "thinking three steps ahead of his adversaries"? If so, how does that Kool Aid taste?

Returning to the American public and the landslide victory it gave him, what was the change that we pinned our hopes on Candidate Obama to achieve? These were not small things. In a word, what we were hoping to see was a reversal of Reaganism.  Just as Hamlet was haunted by the ghost of a king, so it is that the Obama presidency, and the nation as a whole, are even now haunted by the "ghost" of a former president whose disdain for government shows up like fingerprints on all the troubles we are facing today. Remember James Watt? Reagan appointed him to head the Environmental "Protection" Agency as a slap in the face to environmentalists. This country has more than enough trees, rivers, large bodies of water, etc. -  King Ronald decreed. While I'm president, no tree huggers are going to tie the hands of industry and keep this country from reaching its full economic potential! Now, because the environmental crisis in the Gulf of Mexico is foremost on everyones mind, that example seems particularly glaring, but run through all our current problems, the ones President Obama is charged with dealing with, from banking to the military, to healthcare, to corporate outsourcing, etc. and they can be connected as if by Day Glo dots back to King Ronnie's obsession with small social government and a huge military, and his Holy Mantra, "deregulation". That was what we believed in as we threw our support behind Obama, that that could change. We're not so sure anymore, are we? It appears abundantly clear that that was not the change that our president was referring to or envisioning.

I truly believe that he is at heart, a good, decent man who wants his presidency to be a great one, one that goes far toward uplifting this country, morally, economically, ecologically.  I believe that, much as MBA George W. Bush believed that this country should be run and operated as if it were a company, former community organizer Barack Obama believes that this country can grow and flourish through outreach, networking, coming together and working together. Cooperation and sacrifice are his lifeblood, and what he has the power to extol us toward. But we need that voice! We need to believe that it applies to everyone, most obviously the arrogant, "Too Big To Fail" (Too Big to Make Sacrifices?) entities that have caused so much trouble with neither governance nor guidance from elected officials. "Guidance"; that is what they need. Even big companies are made up of little people, just like us. If the U.S. government, with Barack Obama as its leader, could take responsibility for telling the suits, "We are going to do things differently now. You are going to play a different role. Your interests and the interests of this country as a whole are going to conjoin. You are going to  play a large role in making this a great, safe, prosperous, and happy nation and you will have the gratitude of its people as you do so", things would change. The nations of Europe, Japan, etc. have achieved this with far greater success than any of our leaders since the Reagan Revolution have managed. It's doable, clearly. But if the country sees that its president and elected officials appear to be abdicating that role - the very role for which they were elected - then "hope" and "change" seem to be as hollow as the reassurances of BP officials, and as void of life as large swaths of the Gulf of Mexico have become.