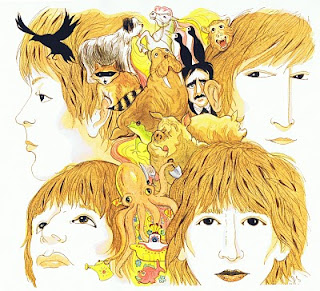 Aw, two of my favorite subjects brought together, The Beatles, and animals (not The Animals, sorry Eric Burdon)! I remember reading a review of The White Album in The Rolling Stone magazine's 10th anniversary issue opining that not since Aesop's Fables, or Toba Sojo's rabbit and frog scrolls of the 11th century, had animals commingled their lives with humans so revealingly. Although that might be a bit of a stretch, it is certainly part of the legendary Liverpudlians' charm and appeal that they spiced up their repertoire with such whimsical oddities as "Octopus' Garden" and "Hey, Bulldog!" More so than other bands of the time, and perhaps before or since, they were fabulists at heart, and that is a key part of what makes them so endearing and enduring.

Dylan was cleverer. Hendrix rocked harder. Pink Floyd was weirder. And the Stones were just plain badder! But The Beatles captured the energy of their time better than any of their manifestly talented rivals. With titles such as "Magical Mystery Tour" and "Come Together", they seem to have clearly, almost mystically, understood and embraced their roles as cultural guides through a period of mystery and excitement and wonder. The times were fraught with peril, but The Beatles, accompanied by their animal familiars, were charging out in front, wanting to hold our hands as they guided us on a journey that included herbs, gurus and revolutions.

So, here then, is my tribute to the Fab Four and their four legged (or eight tentacled, etc.) companions. Fans will have fun picking out the songs the critters are culled from, and will also be aware of what is about to befall poor Edgar Allan Poe!