Corporations Are People Too! 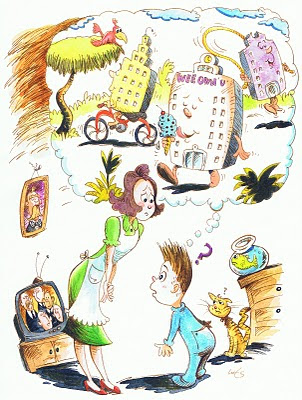 Artwork by me; poetry by AdLib
On a winter’s day in two thousand ten
A decision was made by five crazy men
Their words were all heard by the little boy, Trent
Who then asked his mother what all of this meant.
“Corporations are people? That seems very odd.
I haven’t met one in my class or schoolyard.”
“Do they have arms and legs? Do they like to kick balls?
Do they lick ice cream cones? Do they yell in the halls?”
His mother replied with a shake of her head,
“No they don’t but they’re people, the Justices said.”
“Do they like to climb trees? Do they walk? Do they run?
Do they like to breathe air? Do they sing just for fun?”
His mother replied with a face that was red,
“No they don’t but they’re people, the Justices said.”
“Do they vote in elections? Or drive a fast car?
Do they give birth to babies? Or wish on a star?”
His mother looked weary and ready for bed,
“No they don’t but they’re people, the Justices said.”
“Do they live? Do they die? Or even have souls?
Do they pour lots of milk in their cereal bowls?”
His mother’s heart fell as if  weighted by lead,
“No they don’t but they’re people, the Justices said.”
The little boy Trent had had quite enough,
He started to frown, he started to huff,
“What kind of people don’t breathe or have souls?
Don’t live and don’t die or have cereal bowls?”
“Those five men are dumber than all in my class,
My decision for them? They can all  kiss my ass!”
*****This article, with illustration, can also be viewed at Planet POV, a terrific progressive website which I am privileged to be a contributor to.
http://planetpov.com/2010/01/24/corporations-are-people-too-by-dr-suits/
Posted by andyboerger at 17:39