Do Platypuses Dream of Eccentric Sheep? 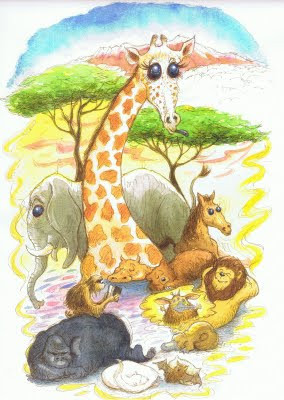 Sleep; who needs it? And who doesn't? Isaac Asimov called it a waste of time, whereas John Lennon wrote one of his most mesmerizing songs in praise of it. My personal alliances are with Mr. Lennon, a warm bed to collapse into at night being one of life's little pleasures for me. On the other hand, some people I know sleep as little as they can get away with, either due to personal preference ( a la Mr. Asimov) or the demands of their jobs. Adult humans might spend anywhere from a third to a mere sixth of their lives in dreamland. But what about our fellow mammals? Who are the Asimovs of the animal world, and who are the (to me, far more sensible) Lennons?

Giraffes - These are critters after Mr. Asimov's own heart. Not only do they look like inhabitants of one of his more unusual worlds, they sleep less than the great man himself! In fact, they sleep less than anybody. They are the true Night Owls of the animal kingdom. They burn the midnight oil, are up with the roosters, catch the worm, etc. etc.; there's not a cliche about sleeplessness these guys don't have covered. For they get by on a mere ninety minutes of sleep per 24 hour period. And even that isn't all at once. Because these giant creatures are such an obvious target, they have to be on the lookout for predators almost continuously. So, the same evolutionary process that endowed them with those crane-like necks also rigged it so that their sleep needs are met by little naps of between five and twenty minutes or so. The next time you're on a safari, consider that the giraffe who's picture you snap might be the reincarnation of some workaholic ancestor of yours who thought that sleep was for wimps.

Elephants never forget, and they rarely sleep. What keeps the largest and strongest land animal on earth up at night, I can't imagine, but sleepless nights are the norm for pachyderms. Sleepless days, too. Rivaling the giraffe in terms of how little shuteye they require, our giant friends get by on around two or three hours of sleep per cycle. This is roughly the same amount as horses, who, like giraffes and elephants, sleep standing up. Rhinos get by on just a few hours too. They can nap standing up, but for their deep sleep periods they lie down.

How much sleep do our closest relatives (chimps, gorillas, orangutans) get a night, compared to our average of eight hours? Well, if you, like me, find sleep to be one of life's treats, then you may think you've ended up on the wrong branch of the Tree of Life. Our genetic cousins generally get between twelve and thirteen hours of quality time with the sandman. Which makes one wonder, if it's good enough for these guys, with whom we differ in less than ten percent of our DNA makeup, why isn't it good enough for us, and are we really the smartest apes?

Hippos are hard to pin down. These giant mammals spend most of their lives underwater, and yet they breathe through nostrils (they are in fact said to be the closest living land animals to whales, who have evolved an entirely different breathing apparatus). They have been observed napping on land, but as for their underwater lives, how do they sleep without drowning? First, they make themselves airtight; they fold their ears over on themselves and close up their nostrils before sinking into the water. Then, while asleep, their bodies rise several times throughout a sleep period for more air. But is it a sleepwalker's sleep, or is it more like getting up and going to the bathroom? If the former, then hippos seem to get about sixteen hours of sleep, far more than their fellow, earthbound, giants, the elephants.

Lions and Tigers and Bears - Oh, my! The living is easy at the top of the food chain! Anyone with a pet cat knows that their furry friends sleep like it's a lifelong calling, and it's no different for the big fellas. Lions average around fourteen to sixteen hours, with the lucky males sleeping up to twenty. Like all big cats, the females use tremendous amounts of energy when they are called upon for a hunt and kill. The male's job is to protect the pride, which means he has less to do on the average day. He sleeps all that time because he can, basically. Same for tigers, and big cats in general. As for bears, they seem to have it even easier; they get to "sleep" a whole season! Technically, bears don't really hibernate. Their metabolism doesn't change radically from normal waking hours in comparison to true hibernators like squirrels. Scientists call what bears do "winter lethargy", which means they basically just zone out during the cold months. Not a bad deal, right? When you're a bear, you don't even have to bother with Do Not Disturb signs.

The Platypus - Looking like it decided to go to a Halloween Party dressed as Darwin's Missing Link, the platypus has puzzled and perplexed people ever since it was discovered. It seems to be going out of its way to be an oddball in nearly every respect, and sleep is no different. For one thing, playpuses are said to be the only mammal that doesn't dream, at least not as indicated by the study of dreaming. They have the deep REM sleep associated with dreams (in fact, they rank first among mammals in this regard, up to eight hours, compared to two for the average human), but not the accompanying frontal lobe activity. On the other hand, not being platypuses themselves, can scientists really say for sure whether they can dream or not? Which raises the question: if they do dream, can they possibly dream of anything more unusual than - a platypus?

It seems almost unholy, or at least not wholly appropriate, to name the Sloth after one of The Seven Deadly Sins. Though long thought to be champion sleepers (up to eighteen hours a day) a recent study led by Dr. Neil Rattenborg reveals that these slow moving critters manage a mere ten, not that much more than a human. And this on a diet of leaves so poor in nutrition that they are forced to conduct their waking activities at an exceedingly slow pace. "Lazy", indeed! They are just coping with their environment. Perhaps the true sloths are the folks who live on a diet of chips and suds when much healthier alternatives are readily available, but that might be taking us into Gluttony territory.

We come now to the Sultans of Somnolence, the champion sleepers of the mammal kingdom. I am tempted to give the award, with no further research necessary, to my own pet ferret, Rosie. Rosie not only sleeps more than ninety percent of her life, she has developed sleep into an art form. She can sleep in any position, from pretzel like contortions that make it impossible to discern how the body parts connect, to stretched out like a bear rug. She can sleep just about anywhere, including my head (I have a picture of this if you want proof)! Furthermore, she seems to never tire of finding new places around the home to sleep, which means precautions must be taken before throwing anything away. In general, though, although ferrets certainly rank in the higher echelons of sleepdom (at sixteen to eighteen hours) they don't get the blue ribbon. That honor goes to the little brown bat. These little guys get plenty of, er, "beauty" sleep (of the "eye of the beholder" type, it seems), managing a mere two to three hours of wakefulness per cycle. They have company; koalas and armadillos are animals with low metabolisms that sleep about twenty hours out of twenty four.

So there you have it. On a mammalian scale, we humans and our roughly eight hours end up pretty much smack dab in the middle. We share the world with creatures who make do on far less, and others who couldn't imagine life without at least twice as much. So if you worry that you're sleeping your life away, remember the lions and bears, kings of their realms, mostly dozing. And if you're frazzled from too few hours in bed, remember the stately giraffe, ever alert, ever watchful, going through life with eyes wide open.