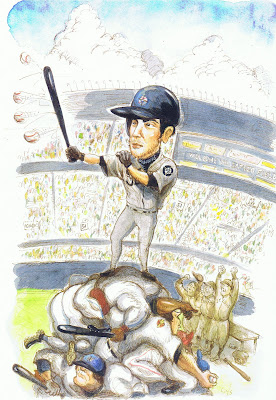 "I could have had a lifetime .600 average, but I would have had to hit them singles. The people were paying to see me hit home runs." - Babe Ruth

"Keep your eye clear, and hit 'em where they ain't" - Willie Keeler (currently tied with Ichiro Suzuki for longest streak of 200+ hits seasons)

If you're a baseball fan, you might be aware that something amazing is about to happen this season. On the other hand, if you're a baseball fan who doesn't reside in Seattle or Japan, you might very well not be aware that something amazing is about to happen. It might take place without more than the briefest of mentions on your local TV news program. A Major League record that has stood for 108 (!!) years is almost certain to be broken this year. This is not some little stat that only a baseball geek could possibly care about, like thirty stolen bases for the largest number of different teams, or something like that. No. This record is going to be the longest unbroken streak of 200 or more hits in a  season in the history of Major League baseball, ever. That number is nine. To give a little perspective, Pete Rose (aka Charlie Hustle) is the all time hits leader, with 4,256 hits to his credit. And the longest streak of 200+ hit seasons he managed in his illustrious, though ethically marred, career? Three, and he did that twice.

Ichiro Suzuki, the diminutive (for pro sports, anyway) Japanese transport who is going to break that record, is no stranger to making history. He already holds the Major League record for hits in a season, a record that had stood for 84 years. If these two records (the one he already broke and the one he's about to) were people, they would have trouble remembering your name but could tell you a lot about WWI. Ichiro has many other distinctions to his name as well, such as being one of only 2 players to win both the MVP award and Rookie of the Year award in the same year. The only thing about THAT distinction that doesn't ring true is that Ichiro was a "rookie" in technical terms only. Coming into the League, he had already accumulated some of the most impressive stats ever seen in his country's professional baseball program. What is so impressive is that his stats have not only not declined in the bigger, tougher Majors, but have actually improved! Had he played all his seasons in the Major Leagues, extrapolating his performance here backwards, he would actually have more than the 3,252  hits he has to date, and could pretty much spend his free time picking out the colors of the shrine they'd be erecting for him in Cooperstown.

Which he should be anyway. The Baseball Hall of Fame would surely be an odd place if it were missing its holder of two major hits records, wouldn't it? And yet, go on sports blogs and you will find people arguing anything from the defensible point of view that talking about his admission into the Hall is premature, as his career is still underway, and he hasn't yet notched up his 3000th hit in the Majors, to the point of view that Ichiro, well, sucks. If you're not a baseball fan, you would probably think that such a point of view is a little, let's say, stupid? If you ARE a baseball fan, you might well think the same thing. Or not. Not only does Ichiro have numerous detractors, an even larger number of baseball fans don't think all that much of him, don't pay much attention to him, and would scoff at the notion that he should be considered anywhere near the upper echelon of current great players such as Albert Pujols, Manny Ramirez, A-Rod and Derek Jeter.

Like the brilliant Japanese movie "Rashomon" in which the same event is given a different spin by each of its protagonists, Ichiro presents an enigma that makes his accomplishments open to interpretation. Sports is about winning, and that is something that his team, The Seattle Mariners, aren't very good at. Their hit-making star has not taken his team even as far as the playoffs since his "rookie" season. A typical Mariners season generally goes like this: they remain competitive, within scrapping distance for the top  spot in their division, up until the All Star break. Then, Ichiro inevitably gets called up to the All Star game and does something extraordinary like making an amazing how-did-he-do-that? catch or hitting a, yes, infield home run (in 2007, first time in All Star Game history). The city of Seattle goes nuts for their hero! He returns to the remote Northwest, the regular season starts up again, and the Mariners start to sink like an olive in a martini. Ichiro generally gets more national press for his All Star appearance than for his work with the Mariners.

So what's going on here? How come all those hits aren't helping his team win more games? The answer to that is the second reason Ichiro bashers give for his unworthiness to be admitted into the Hall. The vast majority of those hits are singles. If you put Ichiro up against any of his rivals for top batting average or most hits in any given season, you will see a significant discrepancy in doubles, and most of all homers. The only stat other than singles where he may possibly keep pace with them is triples, because Ichiro is the kind of player who can turn a double into a triple with greater ease than his rivals. Once he's made that connection of bat to ball, he's a cheetah out there running  on a diamond that is usually trounced upon by lions. And it's not just the fact that he hits mostly singles that bothers some people. To them, Ichiro is not so much a hit machine as a stat machine; they are convinced that he is solely interested in keeping up his numbers and getting his two hundred plus hits per season, even if it means hitting less power hits that add up to runs, and ultimately wins. They say that he gets hits when it doesn't matter anymore, late in the game when pitchers are less sharp. They say he is a bad teammate, a sort of pariah on his own team.

There may be smidgens of truth in all of those sentiments. Ichiro is an eye-of-the-beholder type player. He is also a bit of a throwback to an earlier age. Like Ty Cobb, he's a smart, scrappy hitter who seems capable of performing minute calculations of trajectory and distance while watching a baseball speed toward him at ninety miles per hour. And with his running skills, he can get to first base on unlovely little bloopers that are never going to make a sports highlight reel. Small wonder that the records he is breaking are so old, and weren't even contested until he came along, whereas home run records seem to be continually up for grabs. Ichiro isn't some pumped up, 'roid addicted Incredible Hulk hitter, and let's face it, today's sports fan wants his heroes to be superheroes, displaying superhuman feats of strength in super-sized bodies. Ichiro, when he doesn't have his baseball uniform on, could easily pass for an ordinary Japanese businessman in need of a shave. No bulging muscles, no pop star diva girlfriends, no octupus leg tangles of dreadlocks flowing out from under his helmet a la Manny Ramirez. Just an average looking Japanese man, with a wife and a pet dog back home in Kobe. Snooze.

Of course, it might be different this season. This may end up as Ichiro's year in more than just one way. The Mariners are having a winning season, for one thing. The addition of undisputed (though past his prime) great, Ken Griffey Jr., to the squad has invigorated Ichiro and his teammates. They are currently nine games out of first place, but if they finish strong a wild card bid is not out of the question. If that happens, there is sure to be a lot more buzz about the dusty old record that Ichiro is about to break. If that doesn't happen, if the Mariners finish third in their division and miss the playoffs yet again, then Ichiro's hit record will play to a much smaller audience in the U.S.; mostly just Seattle and its suburbs. In Japan, of course, it will be different. Ichiro the Hit King will be recognized as a genuine marvel, a local boy making it big on one of the world's biggest stages.